Version 10.22 of RelMo is now available for download.  This release fixes a couple issues which have been brought to our attention. The display of mesh data in 3D has been restored, so that data downloaded from GetMapping or similar aerial photograph producers now displays the orthographic image properly.  Text in 3D views have been restored to their proper glory and now display properly in their intended colour. Click on the image to the right to see a full scale version of how 3D text should appear.

(The image shown was generated from GB Ordnance Survey contour data overlaid with an orthophoto of the same area. For clarity the vertical scale has been increased to 2.0)

We’ve also amended the undo / redo functionality when deleting a series of point cloud points.  If you’re using the undo feature with point cloud data, then you’ll have discovered that anything relating to undo and redo can take quite a long time for very large point clouds.  There is simply too much data for RelMo to manipulate quickly.  Rather than you having to wait for the undo process to complete each time you delete a series of points, instead RelMo now saves the data relating to the deletion once at as soon as you perform the first deletion.  For any subsequent deletions RelMo doesn’t save the data. RelMo also only performs a re-indexing of the point cloud data when you escape out of the delete mode.  This saves a lot of time.  The net result is that is if you then perform an undo, it restores that entire series of deletions, so that you restore back to before you first made a deletion.

Another minor bug has been fixed in the text boxes of the layout pages.  If you open an old (pre version 10) survey and try and edit the text boxes, after a few changes any further changes are rejected and the text box simply disappears. This has been rectified. 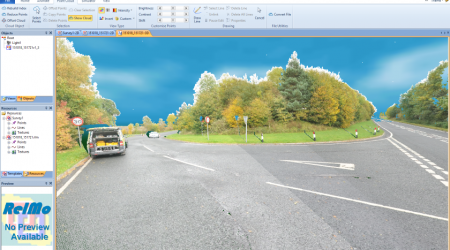